In a recent Young Guns About Town at the Federal Reserve Bank of Dallas, 50 Young Guns were granted a private tour of the Fed’s facility in Uptown Dallas, including a tour of the vault which holds an estimated $1 billion in United States currency. Have you ever wondered what $1 billion in cash looks like?!?!

The current building was built in 1992, but the Federal Reserve has been an asset to the Dallas community for more than 100 years. The reserve system was established in 1914 by former President Woodrow Wilson to ensure orderly and stable economic growth in the nation. Fast forward to 2016, in a time of unprecedented global monetary policy, the tour of the Dallas Fed provided a refreshing take on our federal reserve system and one of Dallas’ most iconic real estate assets.

Prior to its current location, The Federal Reserve Bank of Dallas officed at 400 S. Akard St., a 7-story property built in 1921, specifically to house the bank. Ironically enough in an age of digital currency, the building was purchased by Digital Realty Trust in 2012 and currently operates as a data center. Now a designated historical landmark, 400 S. Akard is known as “The Databank Building.”

Young Guns toured the current facility on 2200 N Pearl St., a 17-story structure with an Indiana limestone exterior, which opened in September 1992. The ground floor, which contains all of the bank’s financial operations, covers six acres, or approximately 250,000-square-feet. The ground floor alone is equivalent in space to a 12-story office building. The building offices more than 800 employees.

As previously stated, the balance of cash at the Dallas Reserve is around $1 billion. The average amount deposited and withdrawn by financial institutions per day is $150 million with some days topping $300 million. 100,000 bills per hour are sorted. Next time you fly into Love Field, look for the giant dollar sign made out of walkways and low walls in the gardens of the Federal Reserve Bank and you will find the vault.

Will the Fed Raise Rates?

While Stephen Clayton, senior economic education specialist with the Fed, was kind enough to provide economic data during the tour, he was wise not to comment on the upcoming rate hike. However, the market has already priced in the rate hike in December and expects two more increases in 2017. The question real estate professionals must ask themselves is, how will this affect long-term borrowing costs and ultimately real estate pricing?

Historically, there is a strong correlation between cap rates and long-term treasury yields. The bank rates will likely track the Fed movement as they are shorter term lenders in nature, but long-term rates are a bit stickier. Long-term mortgage rates track the 10-year U.S. Treasury yields, which are largely affected by inflation and tied in to the global bond market. With Janet Yellen raising rates, signaling strength in the U.S. economy to the Global Bond market, doesn’t classical economics expect inflation to decrease (i.e. cost of borrowing goes up, consumers spend less, prices decrease)? However, with European and Japan central banks lowering rates, lenders are waiting to see how the bond market absorbs the U.S. data and prices the risk of various sovereign debt.

In conclusion, yields on real estate assets continue to be attractive relative to other asset classes. The 10-year treasury yield today of 2.40 percent is in line with the 5-year average and continues to be historically low. See the following chart for historical data: 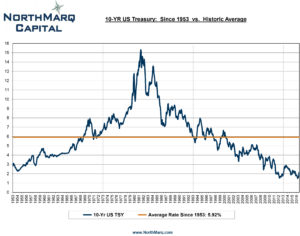 Bobby Weinberg, vice president and producer at Northmarq Capital, arranges debt and equity financing for commercial properties across all product types. Bobby is an active member of TREC currently serving on the Young Guns Core Committee.