TREC In The News

Inside The Luminary, ‘The Lighthouse of the West End’

The West End is undergoing a renaissance, as interest in creative office space is driving renovations and new construction in Dallas’ Historic District. Last Wednesday, Young Guns members experienced one of the newest West End developments, The Luminary, as part of The Real Estate Council’s About Town tour series. The property is an addition of 105,000 square feet and a 462-space parking garage onto the existing building at 401 Houston St. The new square footage sits seamlessly alongside the existing building in floors 1-3, while floors 4-7 are perched on top of the previous building in copper-colored trim.
PHOTOS: Young Guns Tour The Luminary
“The Luminary is the lighthouse of the West End – a pedestal building with a great visible location and the best views of Uptown, West Dallas, and the Central Business District,” said Young Guns member Will Daniell, a senior analyst at Piedmont Realty Trust who participated in the tour.
The expansion commenced when Corgan began outgrowing its headquarters at 401 Houston St. Corgan teamed up with the property’s owner, Crescent Real Estate, LLC, to expand its space; and, to take advantage of the development opportunity, Crescent added an additional 80,000 square feet beyond what Corgan needed, which JLL is leasing. Corgan’s architects designed the building, Holder covered the construction, and Highland Builders completed the interior finish-outs. Representatives from each the companies involved with the development led the Young Guns through the project. 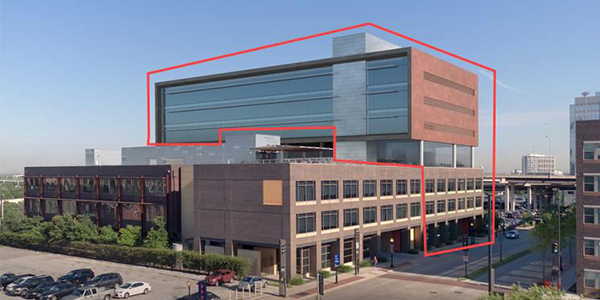 “The opportunity to share the project with my fellow Young Guns was fantastic,” said Jack Bigbie, a Young Guns member who was part of the Corgan team who worked on the project and led one of the tours. “Beyond what you can see on the outside, the Luminary has so many features that make it one of the most innovative buildings in Dallas.”
As both tenant and designer of the project, Corgan was in the unique position of designing the space both for themselves and future tenants.
“This TREC About Town was particularly interesting because we were able to hear and see how an architecture and design firm approaches the process for their own space, although I am sure their approach is the same for all spaces,” said Erin Mullen, an Assistant Vice President at Bank of Texas who participated in the tour. “Corgan was extremely thoughtful in all their decision-making. I found their focus on light to be an indication of what the future holds for developments in terms of mixing wellness and aesthetics.”
While blending in with the historic nature of the West End, the property is also cutting-edge and thoroughly modern. Blending the existing building with the addition, Corgan used wood paneling on the ceiling to maintain consistency, and the new building features exposed brick, concrete, and metal finishes. The top three floors feature 14-foot floor-to-ceiling windows made of SageGlass, which darkens on demand to control glare and heat from the sun. Each panel has its own IP address so it can be controlled independently. At the top of the “jewel box” – at 109 feet — sits a rooftop tenant amenity deck that is the highest view in the West End and provides stunning views of Downtown, Uptown, and Victory Park.
After the tour, the Young Guns experienced the walkability of the West End, walking to 311Kitchen, located in yet another brick-and-timber building now converted into creative office space.